I am thinking of building a new Haswell machine as a second ESXi lab to test the new Oracle Database 12c.  My current lab, a Nehalem rig that was built 4 years ago, will not be up to scratch this test because it has only 24GB of RAM, and the new Grid Infrastructure will need a minimum of 4GB RAM per cluster node.

Haswell will allow a maximum of 32GB RAM..

Just as I was writing the above, I thought to myself, why not ask Uncle Google if my Nehalem board can take 8GB sticks?  It turns out that some people already did fit their EX58 motherboards with 8GB sticks, and managed to get 48GB of RAM recognized! Maybe I don’t need Haswell after all.

But to buy RAM now is a bit hard on the wallet as RAM prices are ridiculous.  Last year, a 4GB DDR3 stick can be bought at RM60 but now it is RM100 per stick!

Should I buy now, or should I wait?

Microsoft released a preview of the upcoming service pack to Windows 8, named Windows 8.1 and also codenamed Windows Blue.  As a user of Windows 8, I wanted to see what are the changes that could be expected when the update becomes live and therefore decided to fire up and test the new OS inside VirtualBox.

I downloaded the 64-bit ISO from this webpage.  The page also gave away a preview product key to be used. 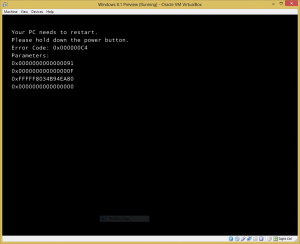 Luckily, someone else had already come across this problem, and created a VirtualBox support ticket.  The solution can be found here, which requires an extra setting to be configured on the virtual machine.

VM_name should be set to the name you have given to the virtual machine.  This can be double-checked using the following command:

Now the ISO booted fine, and the installation can begin. 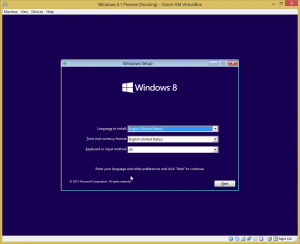